This is a view of the unfinished pylon of Nectanebo I. It is designated pylon 1 and is the first of many massive building projects that a visitor encounters when touring Karnak. There are nine other pylons at Karnak but this is the largest. To say this Temple is huge is quite frankly a giant understatement. It covers an area a little over 300 acres. It has been continually worked on by the craftsmen of Egypt from the beginning of the new kingdom. It is still being worked on today by Egyptian craftsmen, the job now is restoration.

Standing near the Sacred Lake we are looking back toward the pylon of Nectanebo I, it is the structure with the square windows on the left side of this picture. The area this picture encompasses is part of the precinct of Amun in which all of the monuments are dedicated to the god Amun. There are two obelisks still standing at Karnak both of which are seen in this picture. The tallest stands about 97 feet high, and is 320 tons of solid granite. It was placed here by Hatshepsut. The smaller obelisk was raised by the crews of Thutmosis I. It is about 65 feet tall weighing in at 143 tons. In the center of this picture is the Hypostyle Hall which covers an area of nearly 60,000 sq. feet. It is the largest pillared hall in Egypt and among the largest in the world. 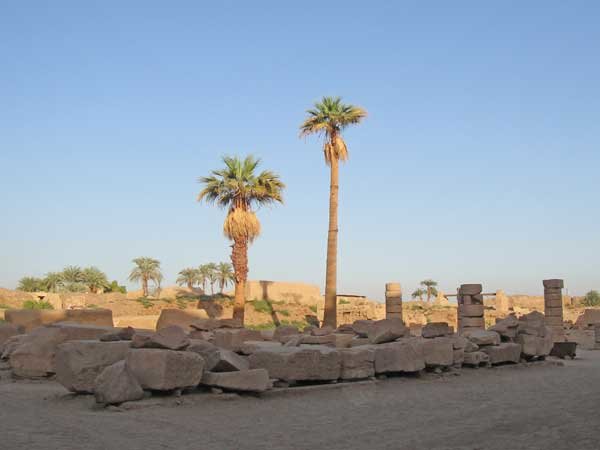 On the north side of the hypostyle hall looking north east towards the pricent of Ptah is a huge debris field. These are the fractured parts of the temple waiting to be reconstructed like a giant jigsaw puzzle. 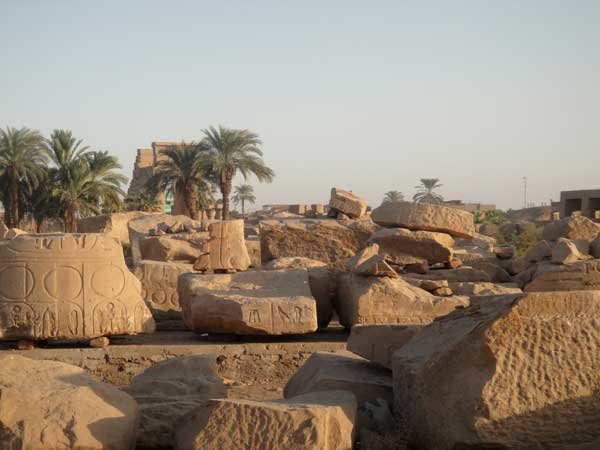 The next photograph is
Approaching the Temple of Karnak
Karnak