Menu
Pyramid Acres
Believe it or not – I live on a Pyramid.
Well… at least the property is the shape of a pyramid.
We call it “Pyramid Acres.”.

. Pyramids were built as tombs for the dead kings of Egypt, At best, they make awkward and impractical homes for the living. We were quite happy to find a pyramid-shaped property, but that is not the reason we bought this house. We liked every thing about the house at Pyramid Acres, but the bonus was that the lower level was 1300 square feet of dry, unfinished, walkout basement. A blank canvas that was ready to become any living space we could imagine. Although it was not part of our original plan, the decision was made to decorate this part of the house using an ancient Egyptian motif. This would not be an easy accomplishment, I had known for some time of the scarcity of Egyptian-style home furnishings. In fact, if you found your way to this site in search of Egyptian decorating ideas, then you too are probably aware of this shortage. In order to pull off Egyptian motif I would have to create most of the decorations myself.

My inspiration came from the carved and/or painted walls that I had seen on my trip to Egypt. I would begin my decorating by creating large-scale Egyptian bas-reliefs. The lotus column,Anubis and my Priest are examples of these works of art. But they have a shortcoming, they were built on the walls and are now permanently attached. I am making smaller reliefs too, I use these to fill in gaps and to create a sense of symmetry. Eventually, I will create even smaller hieroglyphic reliefs to finish the decorations. 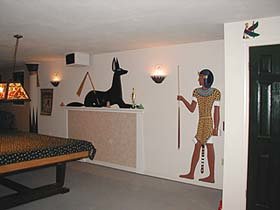 One of my main concerns in creating these smaller bas-reliefs was that they could be reproduced and used many times throughout the basement design. For instance, I needed eightHathor heads to build the columns at the bar and at least four winged scarabs to hang over the four sconces that we had installed. I needed to make these reliefs affordable, lightweight, strong and able to hang on the wall using a picture hook. I experimented with casting and mold-making methods and materials. I learned from my mistakes. Eventually, I came up with some objects that I am very pleased with. The fact that they are lightweight and strong also makes them affordable to ship anywhere. While working on my renovation project, I have created a growing line of products that could help with your Egyptian design needs. I even have a line of products that you can paint yourself to match your decor. Take a look at what I have done to my home, then visit my secure online Gallery Store. At the very least, I hope you will leave here inspired to move ahead with your own design plans.

. Because of the time and costs involved in a project the size of our basement, we decided to break the building into phases. Each phase is assigned a time frame of about one year to complete. Phase one was a bathroom and spare bedroom, which I use for my office. Phase two was a home theatre. Phase three was a wetbar and phase four a wood burning fireplace. There is no deadline set in stone for finishing the decoration of these areas. With the major construction out of the way we will decorate at a comfortable pace. As I create more reliefs, we will hang more decorations.

A drawing of the basement layout.
. Certain decisions needed to be made at the beginning of the project. This would assure that the entire project will blend together. A floorplan was the first and most crucial design aspect that needed to be finalized. We could not afford the time or the money to change the plan once construction had begun. Certain pieces of the floorplan were determined when the house was built. Plumbing was roughed into the concrete floor for a future bathroom. The fireplace would go under the existing chimney chase. The bar had to be located near an existing drain line. Our pool table dictated its location by its size requirements. The office would be nice to have close to the bathroom. And we had to have storage closets. The home theatre fit in to finish the layout.

. Also important to establish early in the planing stages was a color scheme. Our choice of colors started with the largest piece of furniture we owned, the pool table. We picked a dark green felt called Bottle Green to cover its playing surface. Bottle Green would be the predominate color in our color scheme. We used it on doors and on certain highlight walls. The wall on which the movie screen hangs needed to be dark, Bottle Green was the obvious choice. The wall behind the bar was also painted this dark green– a wonderful contrast to the cherry cabinets we had selected. Other colors were inspired by the ancient Egyptian’s pallet. They generally used five or six colors repeatedly. We would use six colors exclusively for all the painting in the basement.

The first large scale decorative element that was put in place was this lotus column. Sticking out from the wall about 12 inches, it acts as a room divider between our home theatre and our pool table. It was constructed using cardboard tubes (cement forms), which were glued, screwed, and spackled to the wall. The capital was made using wire lath, which was built into a rough shaped armature over which plaster was applied. The finished painting used the six colors taken from the ancient’s pallet. 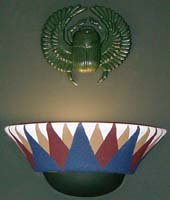 Sconces were added for mood lighting in four locations. They are painted to echo the capital of the lotus column. A winged scarabpainted in semi-gloss dark green becomes apparent only when the light is turned on. 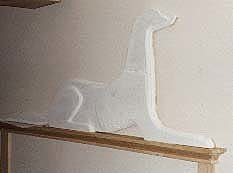 My first attempt at a large scale wall relief is this rendering of Anubis, inspired by my visit to the Tomb of Nefertari (QV #66), which is one of the finest examples of Egyptian painting and craftsmanship to survive into modern times. Anubis can be found in the second stairway as you descend from the antechamber to the burial chamber 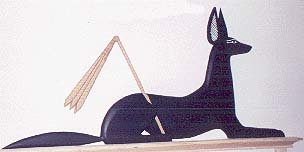 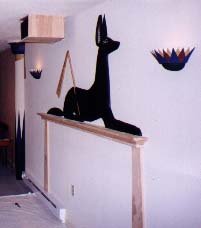 Toe to tail, Anubis is over 7 feet long and nearly 40 inches tall. He is made of three layers of sheetrock and spackle projecting off the wall from 1 to 2 inches.. 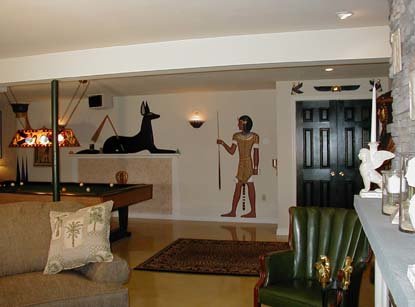 .Grid layout system emploied by the Ancient Egyptians
Priest at the pool table

The second and somewhat more ambitious bas-relief project was this priest holding a pool cue. He was also inspired by the paintings on the south face of pillar # 2 in the the burial chamber of Nefertari.
From his toes to the top of his head he stands 6 feet tall, the pool stick that he holds is real. I used the same grid system that was employed by the ancient Egyptians. This grid, shown on the right, divided the human figure into equal square units, 18 of these squares from the ground to his hairline. This grid system allowed me to project accurately from a small drawing to a 6-foot tall figure on the wall. 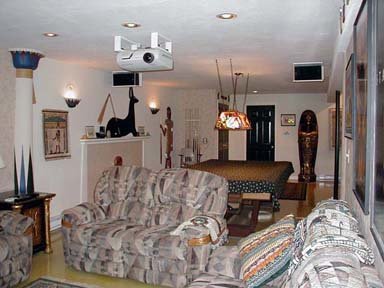 Looking  towards the wall reliefs. .

Looking from the fireplace, towards the wall reliefs 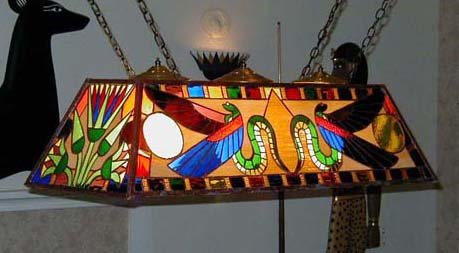 . This beautiful light is a collaboration of my design and my brothers skills in constructing stained glass. It is made up of more than 500 pieces of glass. The colors used in the lamp reflect the colors of the pool balls.

Small Wall Reliefs
. I am also making smaller wall reliefs, which I am casting in plaster and applying to the walls in various places. Unlike the large wall reliefs, these images are of a size that can be reproduced and shipped. If you are interested, you can purchase these wall plaques by going to the Gallery Store. 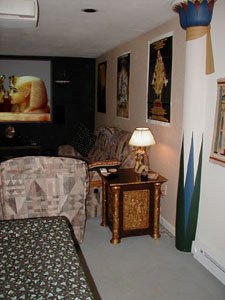 After the construction is complete, the decorating begins. Movie posters, 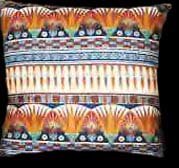 from the movie poster warehouse hang on the walls of the home theatre. You may be interested in some wonderful Egyptian style fine art posters from my new Poster Gallery or a classic Egyptian image from my new David Roberts Collection. The pillows on the couches and the pool table cover are custom made from The Egyptian Pillow Palace, but I am sorry to say that they are no seem to be out of buisness. The end-table is a product of the same artists that are responsible for creating the wonderfulSarcophagi. 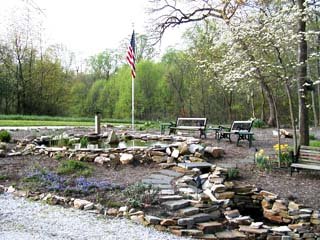 I love working outside in the garden. One of my largest ongoing projects is a garden pond and waterfall. It’s focal point is a pyramid shaped stone that appears to float in the middle of the pond. Other important elements that figured into the design are underwater lighting, fish and plants of many types, including Lotus and Papyrus. 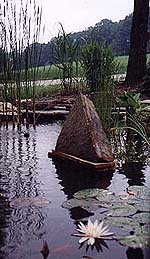 The benefits of a garden pond are measured in tranquility and beauty.