Menu
Check out the new and improved Children’s Mural page
I would like to thank Mrs. Mary Anne Shafer and all the sixth graders of Peters Elementary School for inviting me to their school, for a day of fun and learning. Below are some of the children’s drawings. I enjoy them very much. I hope you will too. Who knows, these children may be the Artists, or even the Egyptologists of tomorrow.
Taurt 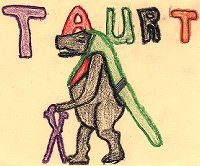 “This picture shows an ancient Egyptian god. It has the head and body of a hippopotamus, mouth and back of a crocodile, and the chest of a human and paws of a lion, plus a pregnant woman’s body shape.”

“We have a poster of a pharaoh and I wanted to draw it. I started liking Egypt when I did a report on how they took their brain out through the nose during the mummification process.” 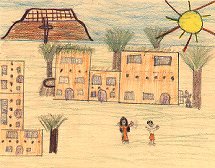 “My picture is about an Egyptian village. The houses were made out of sod. The Egyptian people also used palms for their roofs. The palm trees were often higher than their houses. Egyptians’ houses took long to make.” 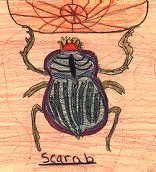 “Scarabs are dung beetles. Like some other dung beetles, they have a peculiar habit of breeding in dung. They sometimes roll this dung into small pellets, which they roll to their underground burrows to be used as larval food. Eggs are laid in the pellets. Egyptians regarded the pellets as symbols of the world, and believed that projections on the heads of the beetles were emblems of the rays of the sun.”

“Anubis is the god of mummification. The Egyptians believed he watched over the mummies. He had the head of a jackal.”

The Clothing They Wore 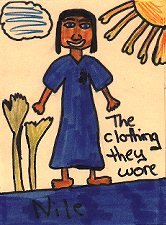 “My picture is about the clothes the Egyptians wore. They wore light cloths because it was so hot in Egypt. These light colored clothes reflected the heat so they wouldn’t get too hot.” 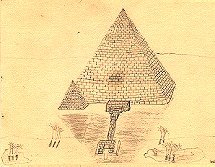 “This is a picture of a pyramid complex. When the pharaoh died he was buried in the bigger pyramid of the complex; the queen would be buried in the smaller pyramid. The tomb was to prevent the body and treasure from being stolen.” 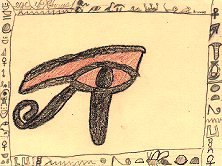 “This picture represents the one eye of Horus. This symbol was used on a lot of jewelry. Horus was an Egyptian god who fought to get revenge for his father’s death.”

Egyptian with a Coke 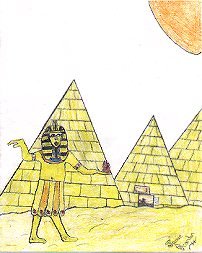 “I like to draw funny things, like some of the pictures you drew. Well, I like Coke so I drew a can of soda. I like food too, so I made a food stand.”