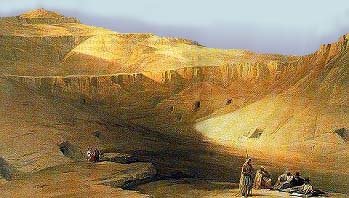 . . . .The ancient Egyptians called this “The Place of Truth”. It is a barren desert valley far from the land of the living. Standing at the far end of the valley is the mountain of Thebes, it creates a natural pyramid under which the pharaohs of the 18th, 19th and 20th Dynasty came to seek their immortality.

. . . . .It contains more then 60 royal tombs from the New Kingdom. Some of Egypt’s greatest rulers were buried here. They built wonderfully decorated tombs that were cut deeply into the valley floor and filled them with riches beyond our wildest imagination. Although efforts were made to protect these tombs from plunder the lore of this treasure was to great. The tombs made easy targets for robbers, their locations remembered long after their doors were sealed and the guards had left.

. . . . .It is rather ironic that the only tomb to have survived with it’s treasure almost completely intact was that of a lesser known pharaoh, a mere boy who’s deeds were probably forgotten shortly after his untimely death and quick burial. That boy was the young King Tutankhamen. The discovery of this tomb in 1922 by Howard Carter has dramatically changed the way we look at Ancient Egypt.

. . . . .For more then 70 years the valley has yielded nothing to compare with the magnitude of Howard Carters discovery. Until recently that is, in 1995 Dr. Kent Weeks decided to look once more at a tomb that had been thought to be unimportant and in poor condition. A tomb that was about to be lost to the world under the construction of a new parking lot. This tomb called KV5(Kings Valley 5) has turned out to be a huge underground complex, both larger and more extensive then anyone dreamed. This was the tomb built for the 50 or more sons of Ramesses II. The work at KV5 is ongoing and discoveries are still being made, and once again the world looks to this desolate valley with anticipation.

Tour the Valley of the Kings
The Tomb of Ramesses I

The Tomb of Merenptah.