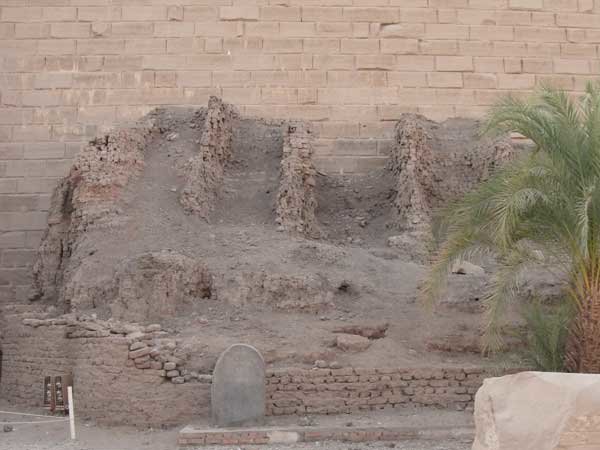 . . . Once inside the huge opening of the 1st Pylon we find ourselves in the First Court. It is the area between the 1st and 2nd Pylons. Turning back towards the 1st Pylon we find evidence that this pylon was never finished. The remains of a mud brick scaffolding give us some insight into long-lost Egyptian building techniques. We can see in the photo on the right how these great temples were built. As you can see stones are stacked roughly one ontop of another. The rough building is completed before the stones are smoothed. The next step would be the addition of glyphs and than painting can be done. 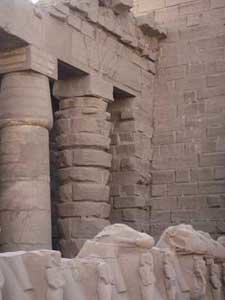 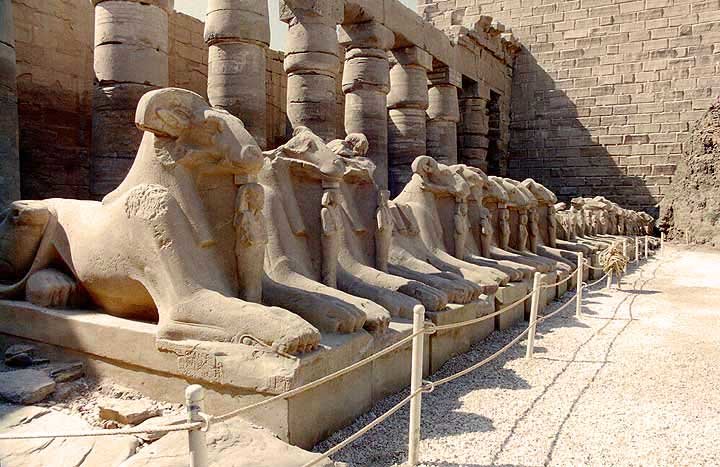 A row of Criosphinx line the pillared portico on east and west sides of the First Court. It looks as if these were put in storage to be used for some later construction. Perhaps they were. They were put here when the Avenue of Sphinxes was removed from it’s original starting point at the entrance of the 2nd Pylon to it’s present location outside of the1st Pylon. 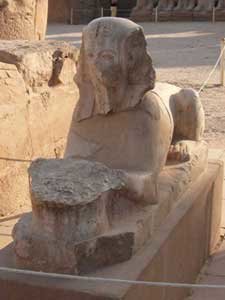 . . . This sphinx belonged to the Pharaoh Horemheb. It now resides in the open air First Court.

If you turned left through the opening of the 1st pylon you would be faceing the Shrine of Seti II. This shrine is dedicated to the Triad of Thebes, the god Amun, his wife Mut and their son Khonsu. 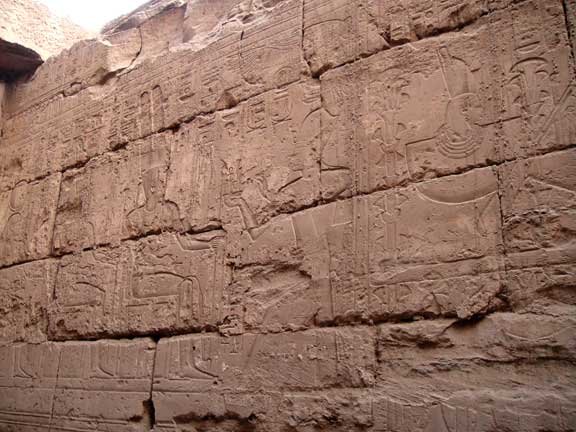 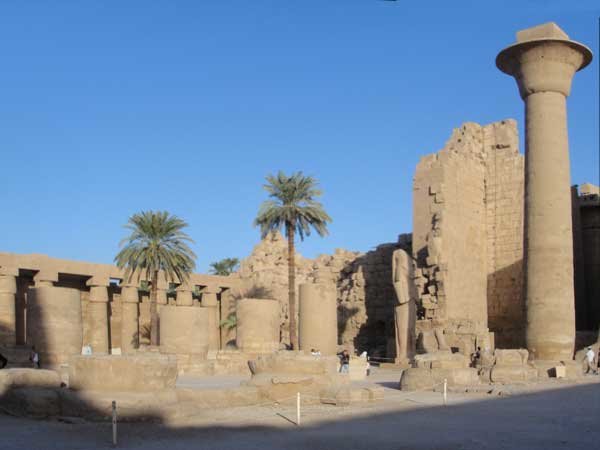 The largest thing standing in this part of the temple is a re-built column known as the Pillar of Tahaqra. Tahaqra was a Nubian Pharaoh of the 25th Dynasty. 10 of these columns once held up a wooden roof over this great kiosk. This area was used to protect the sacred boats. The bottoms of the other nine columns are still visible in these photos. 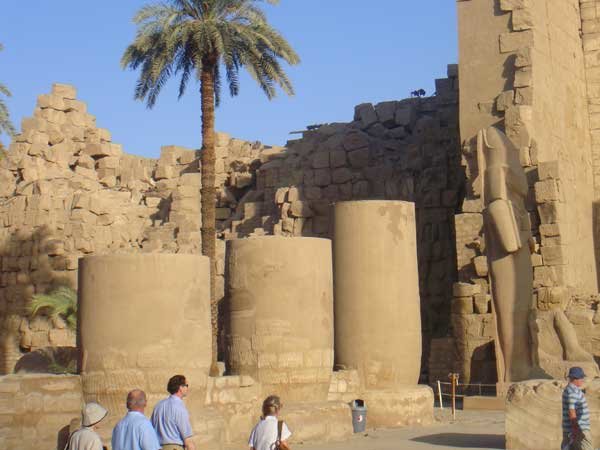 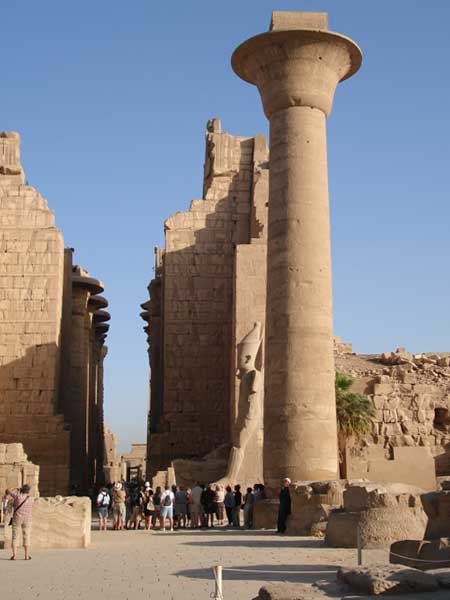 Beyond the Pillar of Tahaqra is the opening of the 2nd pylon and beyond that are the huge columns of the Hypostyle Hall. This is the main axis of the pricent of Amun. On this line you can see all the way through this temple complex from the 1st pylon to the sanctuary. 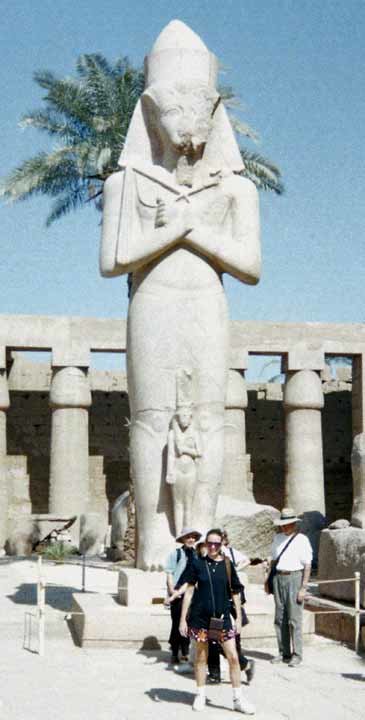 This statue features a princess standing on the pharaoh’s feet. She stands over 14 feet high.

A colossal statue of Ramesses II stands in front of pylon II. It is Ramesses II who was responsible for the completion of pylon II as well as the avenue of sphinx. During Ramesses time this was the front of the temple. The avenue of ram-headed sphinx began here and extended out to the quay. During that time this open air First Court had not been built and the quay along with the Nile was probably closer to this 2nd pylon. 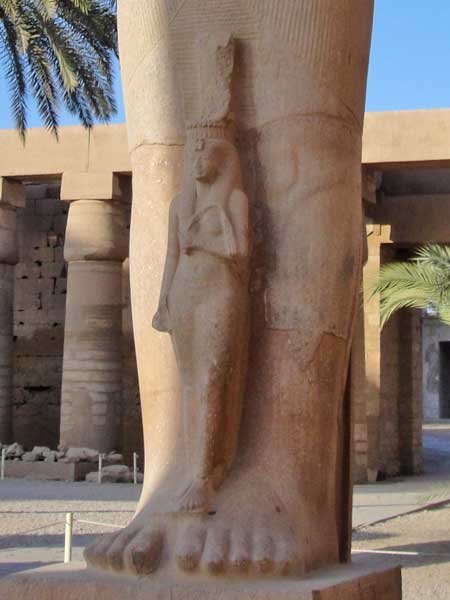 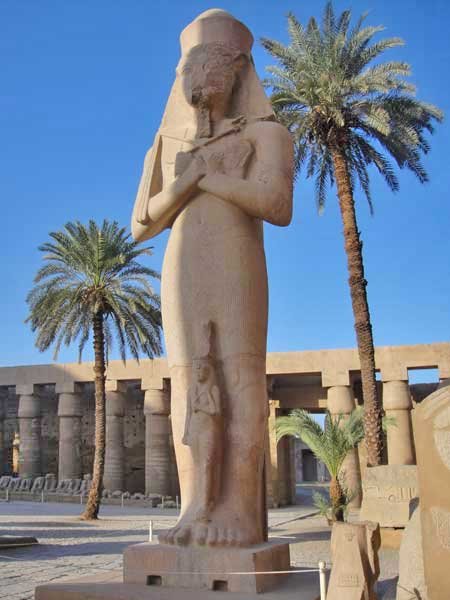 The next photograph is
The Barque Station of Ramesses III.